Day 3 and we are in the flow--well, except for the sleep thing.  Today's event was an arranged tour with Loire Valley Time Travel in a very lovely and unique vehicle named Celestine.  Celestine's human helpers, Simon and Susan, were our escorts for the day.  They picked us up at our hotel promptly at 9am and off we went to Chateau Chenonceau, which is built across a river and is spectacular. The chateau dates from the early 1500s, and if the walls could talk, they would tell quite the story--full of love, intrigue, mistresses, vengeful kings, war and so on. 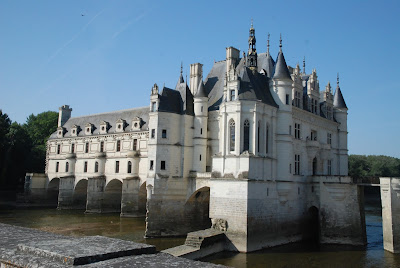 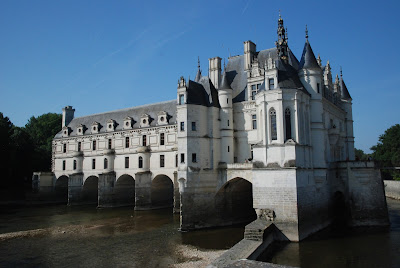 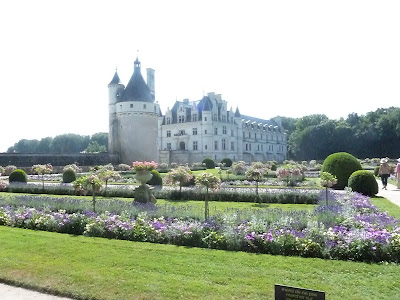 Next, we progressed through the countryside to a lunch spot in Montrichard. We arrived a little before noon, so naturally no one was there.  This place was a family run relais-style restaurant frequented by carpenters, plumbers, electricians and the like for lunch. Susan explained that if you have more than 6 employees in France, the workers have to be provided a lunch voucher and lunch typically takes 90 minutes.  These type of places typically have a fixed price menu that provides patrons an entree (an entree in France is served at the beginning of a mean--think high end salad bar), one of a few main courses, a small carafe of wine, and dessert with cheese.  Imagine any local small town restaurant where the patrons are regulars and that is where we were. Of course, we did not stick out at all (ha). The food was basic but very good and we rate it 4 stars on the Rambler scale (again, we will need to rescale for France at the end of the trip).

After our hearty lunch, we headed off to tour some local caves where mushrooms are grown commercially. The caves were originally carved out in the mining of limestone blocks for building, but as other stones and construction methods came into prominence, the family began to use the caves to grow button mushrooms. At one time they had 500 workers, but the Dutch figured out a way to accelerate the growth of mushrooms and undercut them on the price. The French view is the Dutch method pumps the 'shrooms up with water and so when cooked they shrivel like crazy (they do) and they don't keep nearly as long.  Now, the family has 6 workers and they grow far fewer but exotic mushrooms with much higher prices.  Here are several pictures of some of the 'shrooms: 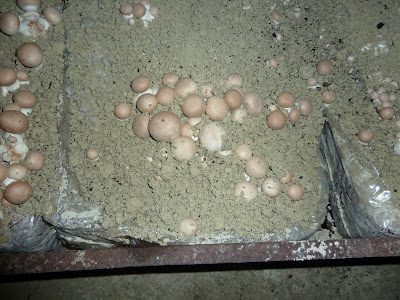 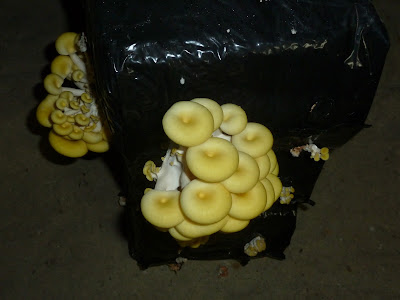 After parading around in the 52 degree caves for an hour, we set off to the first of two winery tours. The first was Domaine de la Chaise in appelation controlee Touraine. We were scheduled to meet with the wine maker (Christophe Devault)  but he had a bad case of the flu so his lovely wife gave us the tour and a tasting of several of their wines. Unlike his father and grandfather before him, Christophe is trying to market his wine under his name rather than selling grapes and wine via the local cooperative, where it would be labeled vin de France.  We bought a nice bottle of Tradition, which is a blend of two reds for a whopping 5 euros.  Here is his wife posing with a bottle.

We hit up another chateau (Chateau Amboise) next, but just for the long distance look-see and to get a cold drink. Driving across the French countryside in Celestine was pretty cool, but a nice Coke sure hit the spot.  Another point about the French and their food: The only Cokes we have been served thus far have been in 33ml green bottles.  Your Ramblers whole-heartedly agree that the green bottled Coke is the best Coke.

To wrap up our day of touring, we returned to Rochecorbon to visit another winery, this one in a cave and a small family affair named Chateau Gaudrelle. It is in the appellation controlee Vouvray and the only grape grown in this appellation is the Chenin Blanc.  We had a thorough tour from a very enthusiastic young man named Charles.  They make a lot of sparkling wine at this vineyard and the process is quite involved.  We really liked several of their wines and bought a case to ship home. Here are some pictures.


Finally, Susan, Simon and Celestine returned us to our hotel and we said our goodbyes and took a few photos.  Next, we set off to find dinner with an emphasis on quick. We drove a few miles down the street to the town of Vouvray and spied a pizza place and thought "that has to be quick". For once we were right, and after a quick (1 hr) dinner we headed home to bed, preparing to head out tomorrow for Port-en-Bessin-Houpain on the Normandy coast.

Until then au revoir and keep rambling.

P.S.  The current bottles-of-wine-to-days-traveled ratio is slightly below one, but your Ramblers are up to the task and we are working hard to raise it.
Posted by Hatch at 8:23 AM